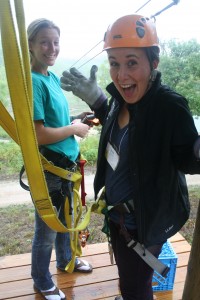 Ana Liuzzi getting ready to zipline across Crown Lake on Day One of the Summit.

Wow, so much was packed into day one of the College Summit! Since it was raining, the dining hall lights at CedarS Camps seemed to glow as I sat at my breakfast table in the crowded room. If I closed my eyes, I might have been back at camp again as a counselor on a morning in July, as the sounds of forks on plates and excited chatter surrounded me. But instead of two hundred children, the room was filled with students my age, adults, and faces I recognized from the TMC Youth website and online lectures. It  felt like we were all a part of a massive clan as we filed out to the outdoor chapel after clearing our plates to hear the Christian Science Board of Directors give the keynote address.  It was so cool to hear the board members speak, as they sat in a row on stage and shared what inspires them most about the Christian Science movement.  I was especially stuck by Michael Pabst saying that our movement will succeed, because of the energy and genuine love for God expressed in our generation. I felt so much warmth and certainty in his words, and I’m sure the whole chapel felt that warmth too.

For the first lecture session, I heard Ginny Luedeman and Chet Manchester speak about relationships and sexuality, a topic that as a CS college student, I have been thinking about very deeply. I think it’s hard for my generation to navigate the waters of dating, and we want some help in thinking about these topics spiritually. I loved how open and honest Chet and Ginny were, and how they continually brought the conversation back to the Lord’s Prayer. How cool is it, that we could have frank and open conversation about these issues, and that the heart of the conversation is the Lord’s Prayer?

After the lecture session, we all came together in the chapel again to hear a discussion on time4thinkers.com’s Radical Acts project:  Follow one of Jesus’ toughest teachings and share your story as it unfolds!  I loved hearing from those who gave examples of radical kindness and unselfishness.  Some of these radical acts happened as simply and naturally as chatting on the airplane to a stranger, and I was moved by the compassion behind these acts.

One of the morning’s highlights was a beautifully crafted talk on Mary Baker Eddy’s life by Chet and his wife, Anne. Chet narrated and Anne read excerpts from Mary Baker Eddy’s writings, so the effect was a lovely combination of first-person and third-person storytelling. The rainstorm picked up momentum before the talk, so the dramatic elements in Mary Baker Eddy’s life were punctuated by rain blowing into the outdoor chapel! Towards the end, Anne read a poem from Pulpit and Press that fit so perfectly with the rain falling around us: “What if the little rain should say, ‘so small a drop as I can ne’er refresh a drooping earth, I’ll tarry in the sky.” The message was compelling:  while one tiny raindrop might be convinced of its own insignificance, it takes the work of thousands of raindrops to water the earth and clear the night sky. And so we’re all raindrops and we aren’t alone, ever! Our work as Christian Scientists matters and it has a pure, nourishing effect on the world!

In the afternoon there was some free time for us all to do various fun activities around Cedars! Since I worked as a counselor at Cedars this summer, I helped run the zipline for the Summit folks with my friends Megan and Trey. Towards the end of the activity period, Megan hooked me in to the line and I got to take one last zip across the lake!  It was even faster in the rain! Soaring above the lake at 700 feet, and the freedom and exhilaration that came with it, seemed like the perfect way to live my first day at the College Summit!

This entry was posted on Tuesday, September 4th, 2012 and is filed under College, College & Graduate School News, News. You can follow any responses to this entry through the RSS 2.0 feed. You can leave a response, or trackback from your own site.