“Be the Christmas Blessing to our Community!”

“Be the Christmas blessing to our community!” 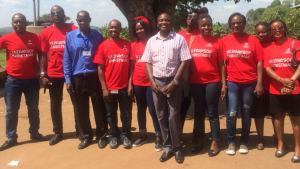 That was the message that landed in the email box of our Africa Programs Manager, Lamech Katamba early last November. Airtel Uganda, one of Uganda’s biggest mobile phone companies, was inviting Lamech—and 10 million other Ugandan cellphone users!—to submit a project for its 12 Days of Christmas Grant Program.

Not one to shy away from “passing his blessings forward,” Lamech, who lives in the capital city, Kampala, developed a brief but strategic proposal requesting funds for the doors and windows needed at the primary school under construction in his home village, Kyamulinga, in Kassanda County. The school serves 257 students from seven surrounding villages.

A few weeks later, much to his surprise and excitement, Lamech received a notice that his project was one of the 12 nominations that Airtel selected from throughout Uganda for its community-outreach initiative.

Gathering for the celebration with Airtel

According to Airtel, its 12 Days of Christmas Program aims at rewarding individuals and organizations that have made a remarkable difference in the lives of their community members.

Lamech certainly qualifies! In 2003, he was instrumental in starting the Kyamulinga school with other community members and has continued to stay involved—a beloved side project while managing ABF’s Africa Program in 12 African countries!

Lamech thinks that Airtel selected his grant project from the possibly thousands of nominations because, as he says, “I focused on making my proposal short and to-the-point. I was very clear about the positive and far-reaching impact of the school on our community, including educating orphans, employing community members, providing a market for local agricultural products, and developing community partnerships that benefit our students.” 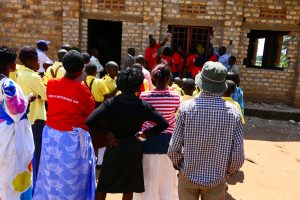 Fitting a sample window in place

The entire village gathered on December 5th when Airtel presented the doors and windows to the school. The whole village turned out for the celebration that included, T-shirts, water bottles, backpacks, umbrellas, and a special cake just for the occasion—all for the students, teachers, parents, and community members.

“I cannot find the perfect words to describe exactly how happy everyone was, and is, in my village,” Lamech says. “But just know that it was the biggest Christmas gift ever to our community, and everyone was so happy and appreciative!”

We understand! Nothing feels quite as good as being part of a blessing!

This entry was posted on Tuesday, December 12th, 2017 and is filed under Africa, International News, News. You can follow any responses to this entry through the RSS 2.0 feed. You can skip to the end and leave a response. Pinging is currently not allowed.